Home Opinion With polling in Sabah tomorrow, still no clear sign of a winner 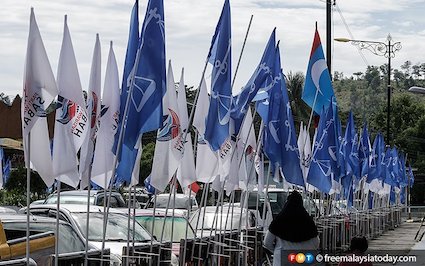 (Bernama) – With polling to take place tomorrow, there is still no clear sign which party will win the Sabah election.

It continues to be a neck-and-neck race, especially between the two main contenders – Gabungan Rakyat Sabah (GRS) and Warisan Plus – to determine which side will rule the state for the next five years.

Both sides have a 50-50 chance and what they do and who can win the hearts and minds of the voters in this last lap of campaign will determine their fate.

This is the conclusion drawn by Zaini Othman, a political analyst who went to ground and carried out studies in most parts of the state, where 73 seats will be up for grabs.

Zaini, who is also a Sabah geopolitics and electoral researcher at Universiti Malaysia Sabah (UMS), said the absence of a clear indicator is probably due to the fact that the election came as a bombshell and the political parties and voters were not prepared for it.

He said this caused internal bickering among the parties due to dissatisfaction over the many hasty decisions made, including the selection of candidates.

These internal conflicts caused other reactions, including elements of sabotage, members standing as independent candidates and the revival of long-forgotten parties used as platforms for them to join in the fray.

“Thus, it is not surprising that there are 447 candidates in this election, which is greater than the number of candidates competing in the 14th general election for the state and parliamentary seats combined,” he told Bernama.

Zaini said his studies indicated domestic concerns were more prominent compared to national issues, including the possible change of the administration in Putrajaya, seen as a “cosmetic” distraction that has no effect on the results of the state election.

Sharing his sentiment is Universiti Malaysia Sabah senior lecturer and researcher Syahruddin Awang Ahmad, who said it is difficult to say which side will win because they have their strengths and weaknesses, in terms of how well they convey their campaign messages to the voters or address local issues raised by the people.

He said the clash between Warisan Plus and GRS is intense and only a few seats are expected to see a large majority.

GRS is made up of Perikatan Nasional, Barisan Nasional and Parti Bersatu Sabah (PBS) while Warisan Plus consists of Warisan, DAP and Amanah as well as allies Upko and PKR.

“Victory is unpredictable until the night before the polls because issues that arose in the first and second week of campaigning have become liabilities to the candidates and parties from both blocs,” he said.

For Romzi Ationg, a political researcher with UMS, campaigning has reached almost its full throttle, indicated by the increasing numbers of posters of the candidates and their constant presence on the ground.

Romzi opined that Warisan Plus is getting more and more attention from the people, although it is not easy for the coalition to win the hearts and minds of the voters this time around because GRS has strong support in many of the constituencies.

“At this point, I see the chance of winning between Warisan Plus and GRS remaining at 50-50,” he said.