Home Opinion Why DAP is betting its future on Borneo: Answer — Christians 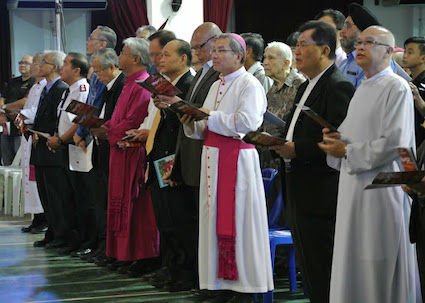 Native Christians are the DAP’s blue ocean vote bank, especially with the weakening and fragmentation of local non-Muslim parties.

Sabah and Sarawak both taken together have a total of 2,054,025 Muslims in their collective citizen populations. The two states have altogether 1,770,145 Christians.

Both sets of figures are from the last census and do not include residents who are non citizens. Illegal immigrants are an important election issue with the local Christian KDM (Kadazan, Dusun, Murut) community because a very large proportion of PATI residing in Sabah are Muslim.

There is merely a small gap between the number of Muslims and Christians in these two East Malaysia states. The biggest asset for DAP is the fact that the Christians in Borneo are native peoples.

The indigenous status of Sabah and Sarawak Christians will give a cover of legitimacy to the DAP’s long-term plan to grab power through riding on the back of these pribumi Christian populations. That’s why you see the DAP so keen on elevating Sabah and Sarawak to a parity with Semenanjung on their amended basis of Malaysia being comprised of three regions rather than 14 states.