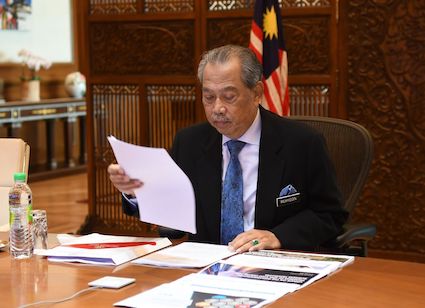 It seems like the PM is engaged in an intense game of chess against multiple opponents.

IF politics is a chess game, then the Prime Minister is playing a simultaneous game against four opponents.

He was referring to the chess term, which Dictionary.com defines as “a situation in which a player is limited to moves that cost pieces or have a damaging positional effect.”

For example, Wan Mohd Shahrir said, the Umno president could not take his party out of the Perikatan Nasional government as it would then be in the Opposition.

Zahid can’t support PKR president Datuk Seri Anwar Ibrahim in his bid to become Prime Minister as the majority of Umno leaders and members do not want to cooperate with Anwar and DAP, he said.

“Zahid has offered a draw to the Prime Minister, ” he said.

On Thursday, the Umno president issued a statement stating that Umno would undertake a political ceasefire with the Perikatan government to help the country deal with the Covid-19 pandemic.

It is checkmate for Anwar, according to Wan Mohd Shahrir.

The PKR president, he said, could not provide the names of MPs to convince the King that he had the numbers to bring down the Muhyiddin government. Anwar has also lost the support of Umno’s “kluster mahkamah” (court cases cluster), he said.

Tengku Razaleigh (aka Ku Li) was trying to check Muhyiddin by urging the Dewan Rakyat Speaker to allow a no-confidence vote against the Prime Minister, Wan Mohd Shahrir said.

“That is his opening gambit. His game is still in the opening stage where he used the attacking Sicilian Defence, ” he said, referring to the aggressive defence which black employs in the first move.

“But what Ku Li is going for is to defeat the Budget, which will be voted on around Nov 23. He knows that the Speaker would not allow for a no-confidence vote to be tabled.”

Quoting Rudolf Spielmann, a chess player known as the “Master of Attack”, he said Mahathir was playing “the opening like a book, the middle game like a magician, and the endgame like a machine”.

“It is a waiting game for Tun. He is waiting for a better position on the chessboard for him to strike or go for the end game, ” he said.

If Muhyiddin was a chess player, Wan Mohd Shahrir said he was Tigran Petrosian. Petrosian was nicknamed “Iron Tigran” because of his “almost impenetrable defensive playing style, which emphasised safety above all else.”

It appears that the Prime Minister grew weary of the simultaneous chess games on Friday. He and his Cabinet have decided on a drastic move to counter his political opponents in the time of Covid-19 by proposing a declaration of emergency to the King

The King and his fellow Malay rulers are meeting today to decide on the proposal.

Even though Zahid has offered a draw to Muhyiddin by issuing a ceasefire with Muhyiddin and Bersatu, it did not help to make the Prime Minister feel that he was politically stable, said Universiti Teknologi Malaysia political analyst Dr Mazlan Ali.

“Anwar’s claim that he has enough MPs to bring down Muhyiddin, and Tengku Razaleigh’s move to urge the Speaker to allow a no-confidence vote against the prime minister has made Muhyiddin goyang (wobbly), ” he said.

“It looks like Muhyiddin isn’t confident that he has the numbers to pass the Budget.”

Not being able to get the Budget passed is a measure of a government leader’s lack of support in the Dewan Rakyat.

“We don’t know what the proposals are based on. Is it to stop the spread of Covid-19 or to stabilise the political turmoil? Or both?” said Dr Mazlan.

With Muhyiddin’s latest move, which the King and his fellow Malay rulers will decide on today, it looks like the country is in a stalemate. (Stalemate, according to Dictionary.com, means a player’s pieces are in such a position that he cannot move any piece except the king and cannot move the king without putting it in check.)

Our greatest fear is having no leadership