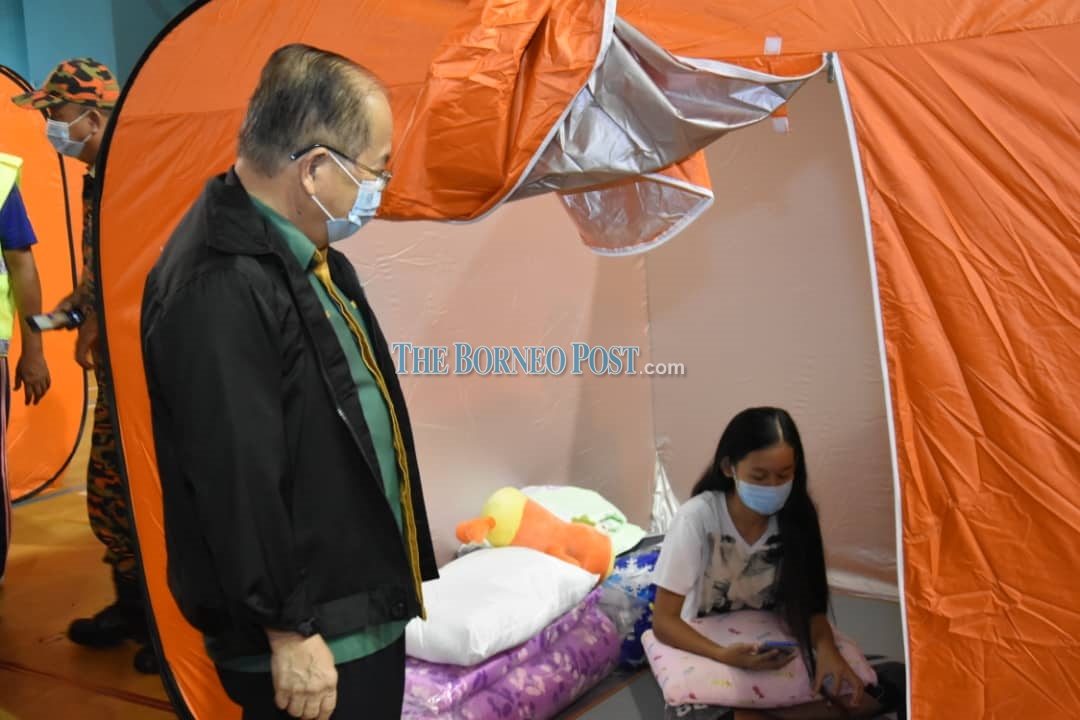 Uggah visiting some of the flood victims housed temporarily at the Kapit Indoor Stadium.

He said the proposed stations are to be installed at Nanga Tulie and Nanga Mujong here, adding that SDMC will be discussing with the state’s Drainage and Irrigation Department on the need to install the two telemetry systems.

Uggah made the proposal after he was briefed on the flood situation in Kapit Division before visiting evacuated flood victims at the Kapit Indoor Stadium this morning.

A total of 84 individuals were housed temporarily at the indoor stadium after their homes were submerged in water following non-stop heavy rain for two days.

A total of 78 of them were from Rh Philimon in Nanga Bawai, and the rest were from Kampung Muhibah and Kampung Baru.

Uggah said the station in Song, meanwhile, would be equipped with a new battery to allow it to continue operating at optimum performance.

He said Kapit currently has 11 telemetry stations, out of 500 statewide.

“They are very important to measure rainfall volume and monitor water level in our rivers. They serve as an early flood warning system.

“If the people can be alerted early to the possibility of flood, they can make the necessary preparations to minimise property loss or damage or move to higher ground and evacuation centres,” he said.

Uggah also commended efforts by the Divisional SDMC for providing excellent services to those affected, and in handling the situation.

“I have been told before the victims moved in, the stadium had been sanitised first in view of the Covid-19 pandemic.

“The surroundings too had been sprayed with insecticide to get rid of mosquitoes,” he said.

He added it was praiseworthy too, that infants had been provided with the infant formula of their parents choice instead of having a single brand.

Uggah also noted that the Welfare Department, Bukit Goram assemblyman Jefferson Jamit, Wilson Nyambong, Tabung Baitumal and others had been quick to respond to the victims’ needs.

“The Fire and Rescue Department (Bomba), the Police, Rela, Resident’s and the District Office and others had played their parts.

“This is our SOP and we fully sympathize with the victims. On behalf of the state government I wish to thank all involved,” he said.

Nanta, who is also Kapit MP, meanwhile said the Domestic Trade and Consumer Affairs office here would also offer foodstuffs to the victims.