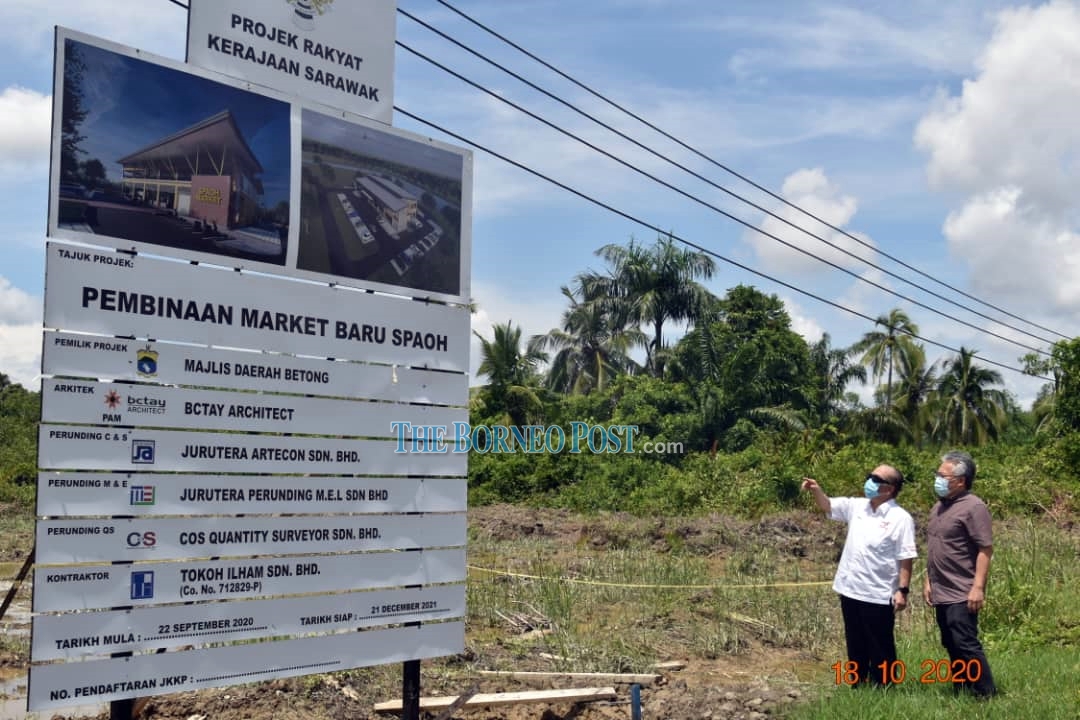 Uggah and Betong District Council secretary Charlie Keling at the site of the new Spaoh market.

DEBAK (Oct 18): In anticipation that the 12th State Election could be held anytime from now, Deputy Chief Minister Datuk Amar Douglas Uggah Embas said all election workers from outside the state must obtain working permits before entering the state.

“They are here to work so the permit is a must for those coming from Sabah or the Peninsular Malaysia,” he said when officiating at a briefing for Bukit Saban constituency campaigners, polling and counting agent here today.

Some 135 people attended the briefing conducted by a political secretary to the Chief Minister Dr Richard Rapu.

Uggah also had a word of caution for the local campaigners and workers, telling them that their counterparts from the outside were known for their more aggressive or robust behaviour.

“Let us not be cowed but neither should we imitate them,” he said.

Uggah, who is Bukit Sabah assemblyman, also urged all Gabungan Parti Sarawak (GPS) workers to spare no efforts in ensuring all GPS candidates not only retain their seats but win big in the coming state polls to allow the state coalition to form the government again.

“We must have a rock solid foundation for a very strong, stable government. We must be fully prepared as the election can be called anytime (from) now.

“Our campaigners must be able to rebut the many accusations and lies propagate by those against us,” he said.

On a lighter note, he said the election fever was very much in the air in the Betong Division.

“Some people believe in flying more of their party flags here than our GPS flags. Let us respond accordingly by matching them to show we mean business in safeguarding our turf.

“We also have been toiling all these while to bring evidently more development and progress here. But an aspiring opposition candidate is going around saying he has not seen anything,” he said.