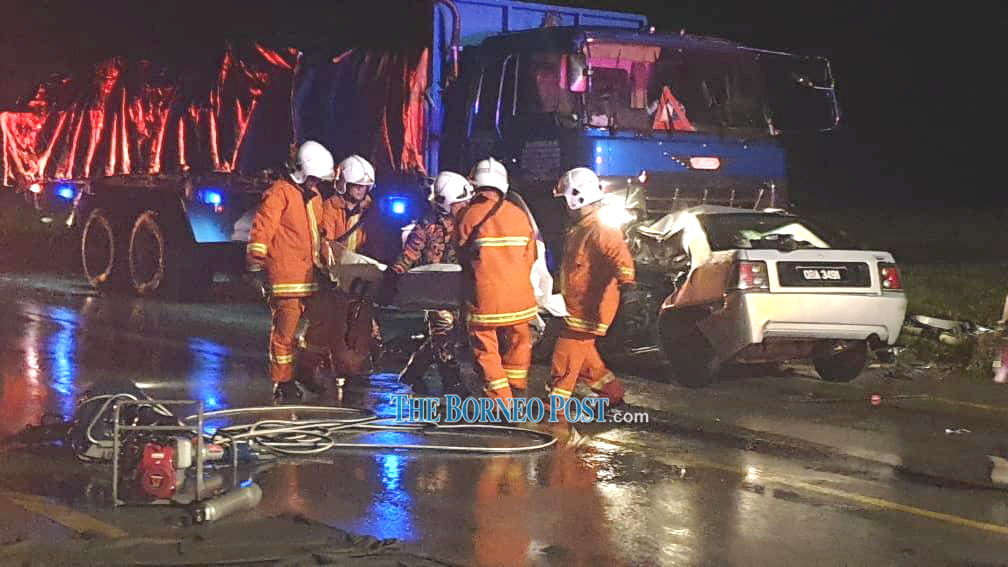 Firefighters move one of the victims onto a stretcher.

SARATOK: Three people were killed, while three others were seriously injured after the car they travelled in collided with a cargo lorry near Salcra junction here on Monday.

A statement from the Fire and Rescue Department (Bomba) state operations control centre said a distress call came in at 5.44pm.

A team of 10 firefighters from the Saratok station was despatched to the scene.

When the firefighters arrived at the scene around 12 minutes later, they found six people trapped inside a car.

They managed to extricate two injured victims from the wrecked vehicle by 6pm and had them brought to Saratok Hospital on board a Bomba Emergency Medical Response Service (EMRS) vehicle.

Another injured victim was brought out from the wreckage a few minutes later, and rushed to Saratok Hospital on board an ambulance.

Firefighters took more than an hour to extricate the other three trapped victims, who were already pronounced dead at the scene by medical personnel.

Those killed were identified as Raju Lian, 43; Irene Jerah, 44; and Vanessa Deborah Medan, 16.

The lorry driver, who was unhurt in the incident, said he was travelling towards Saratok, while the car came from the opposite direction.