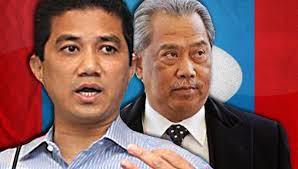 Azmin Ali was made the country’s Economic Affairs Minister for a reason – to help steer the economy in the right direction and help the nation reduce debts left by the previous administration.

As a voter, that was my understanding and most of us had confidence in him.

We also strongly believed in the leadership of Tan Sri Muhyiddin Yassin whom we held in high regard after he opposed Datuk Seri Najib Razak with regards the 1MDB scandal and left Umno.

Never did we think that someone like Muhyiddin would work with Azmin on a sinister plan to overthrow Tun Dr Mahathir Mohamad.

And no wonder the country’s economy never improved – Azmin was too busy masterminding the whole plan to take control of the country’s administration instead.

He and his close ally, Zuraida Kamaruddin were spending their time focusing on how to stop Datuk Seri Anwar Ibrahim and how to overthrow Dr Mahathir.

All this for their personal, greedy selves – at the expense of the poor rakyat!

I would like to know what the trio of Muhyiddin, Azmin and Zuraida have done for the nation since PH took over the administration.

As a layman, I think Azmin should not only be sacked from all political positions, he should also be jailed for masterminding this entire coup.

Because of his stupidity and greed, the nation’s economy took a further stumble and is still struggling to get back on its feet.

It is time the MACC begin investigating what he and Zuraida were really doing all this while and why they are known as the “cartel”.

It makes me angry and sad to think that the innocent rakyat who put our faith in you were cheated like a bunch of low-down fools.

I remember when PH won over two years ago, there was great joy and celebration.

I flew to my hometown to vote and when I landed back in KLIA2 the results were out and there was great shouts of joy everywhere.

Even the taxi driver who sent me home refused any payment as he said he was a PH supporter and was overjoyed with the victory.

How cheated we feel today – Muhyiddin, Azmin and Zuraida have betrayed the nation and treated us like fools.

I pray and hope that Dr Mahathir along with Anwar are able to put things back in order and stop all this bickering.

Give Anwar what is due to him and together please help us rebuild the nation and also our trust in PH once again.

‘I was not the home minister then,’ Najib says on spyware purchase

What now for Mahathir?