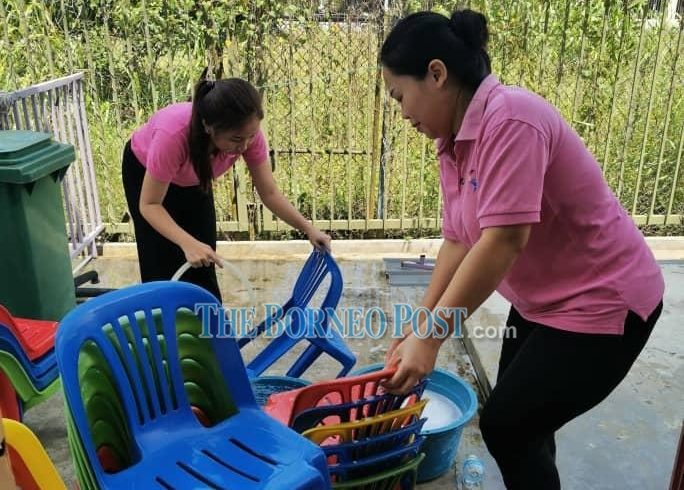 Staff at Taska Sri Eureka Montessori cleaning the chairs in preparation for the reopening of the childcare centre.

SIBU: Some childcare centre operators here have started cleaning their premises in anticipation of their reopening after more than two months out of business due to the Movement Control Order (MCO).

“During the Movement Control Order (MCO), we could not come out, so cleaning was stopped during those periods.

“However, once Conditional MCO started, we went to the centre almost every day to clean. It is our responsibility to keep the centre clean; to keep the children safe,” she told The Borneo Post when contacted.

Ling said safety and hygiene of every child under their care are always their priority, pointing out that the centre is sanitised every year.

The MCO, which restricted public movement and shut down non-essential businesses, started on March 18 following the Covid-19 outbreak in the country.

Subsequently, the Federal government implemented the Conditional MCO on May 4 until June 9 which allows the resumption of most economic sectors, except for those where social distancing or crowd control is difficult. All schools remain closed.

Ismail stated that the SOP refined by the Women, Family and Community Development Ministry has been approved by the government.

Ling, who is also the headmistress of Fu Yuan Kindergarten, said she was happy that the government had finally announced that all childcare centres can open.

“However, on our side, we have the responsibility to make sure that our centre will be a safe place for our children,” she said. 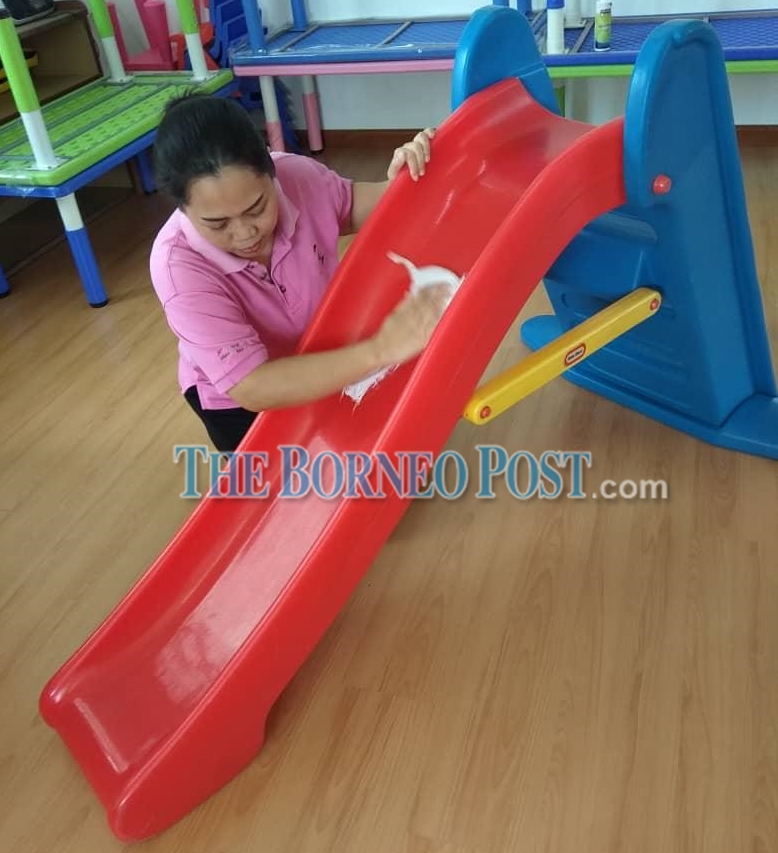 A staff at Taska Eureka Montessori at Jalan Tun Abang Haji Openg cleans a slide to prepare for the reopening of the childcare centre.

Ling said that she would follow the SOP guidelines as required by the government once the centre is opened.

“We are still in the preparation work and we are still not sure when we can open the centre,” she said.

She said currently, the centre is taking care of about 30 children, however, she was not sure how many children would come back once it reopens.

“It is up to the parents, if the parents are not ready to send their children, then it is fine, we will understand that,” she said, adding that the kindergarten would still remain closed until the government announced it can be opened.

Meanwhile, Beatrice Lin, who owns Taska Sri Eureka Montessori at Jalan Tun Abang Haji Openg, said she was still waiting for the confirmation from the Social Welfare Department in the reopening of her centre.

She said with the revised SOP, she was still not clear on what was required for the centre to ensure safe reopening.

However, she was preparing to make sure that the centre would be safe and hygienic for children under its care.

“We have people who come to clean the centre on a regular basis all this while, even during the MCO. Schools and centres have to be cleaned all the time,” she said.

Beatrice said she had already received calls from some parents regarding the re-opening of the centre.

“I am certainly happy to hear the news, I know that some parents need help in taking care of their children when they go to work,” she said.

Glokids Kindergarten also runs a childcare centre at the premises.

She also said that she was not sure when she would reopen the centre, but would make sure that they would only open once SOP was complied with.