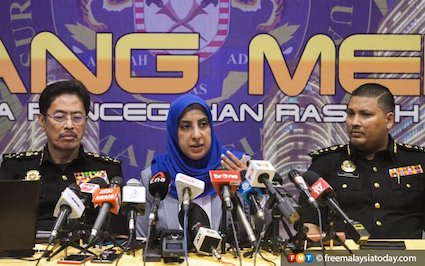 (NST) – There has to be a case that a crime has been committed, the actual identity of a suspect known and sufficient evidence to be brought to the public prosecutor.

When investigations are completed, the enforcement agencies will submit the investigation papers to the public prosecutor, who will evaluate all the evidence and decide if there’s sufficient evidence to prosecute the suspect in court.

Once the suspect is charged in court, a trial will begin. The suspect, who is now an accused person, will be represented by a lawyer and all relevant evidence will be put forward by the public prosecutor for the court to determine whether there is a proven case beyond a reasonable doubt.

In a trial, in order for a tape recording to be admitted as evidence, there are stringent steps to be taken.

The steps are as follows:

a) IT must be the original tape which was used on the day of the recording;

b) THE tapes were run through and found to be magnetically clean before the recording was made;

c) THE machine used to record the conversation was in proper working order;

d) THE tape was not tampered with or altered in any way; it should be established in whose possession the tape was at all times;

e) THE officers (or other witnesses) played the tape over after making the recording and heard voices which they can identify;

f) A TRANSCRIPT was prepared of the voices; if it was just taken down in shorthand, the typed transcript prepared from the shorthand notes should be saved;

g) THE officers (or other witnesses) played over the recording and checked it with the transcript to identify the voices in the conversation.

The voices in it have to be identified by the complainant when the tapes are played in open court and not in any other venue. Failure to prove the above conditions or a lack of evidence to prove an accurate account of a conversation that occurred will render the tape recording evidence inadmissible.

There have been many cases where tape recording evidence was held to be inadmissible by the courts due to various reasons.

One of the biggest fears is tampering of evidence. An investigation agency cannot usurp the powers of a court of law and, in the interest of justice, it is best the agency refrain from sharing classified information with the public.

On our abused and expendable migrant workforce

Mahathir and his role in the Sabah-Sulu crisis

The Umno-Bersatu wounds will take time to heal