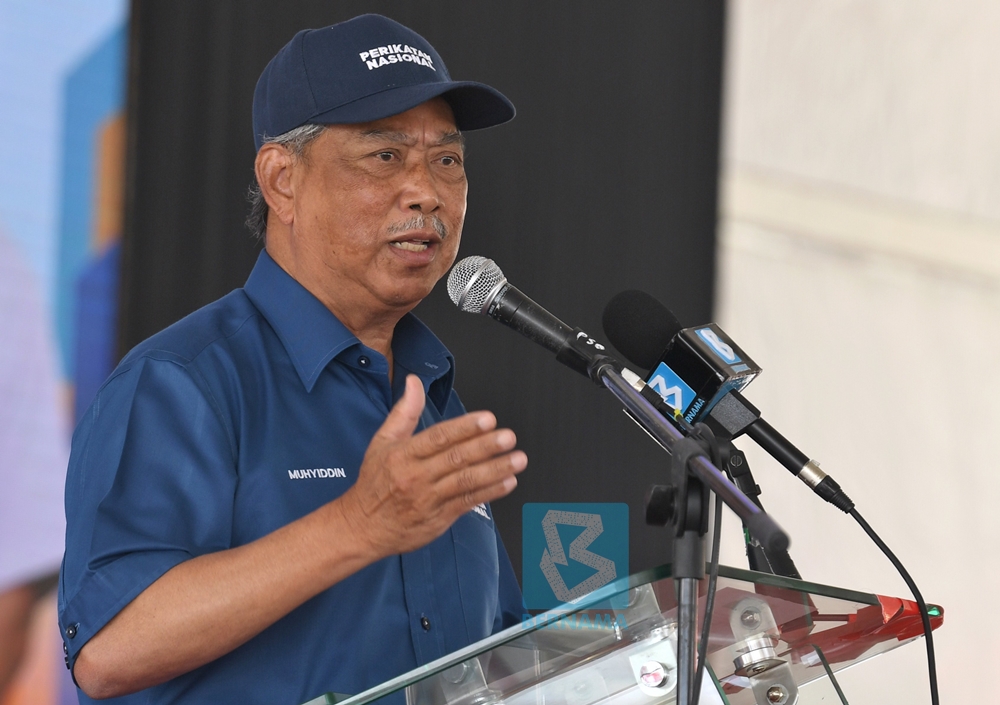 Tan Sri Muhyiddin Yassin speaking at a venue on the campaign trail in Sabah. – Photo by Bernama

SANDAKAN (Sept 24): Tan Sri Muhyiddin Yassin, in a dig at Pakatan Harapan’s claim that Malaysia was almost bankrupt, said today that the Federal government was able to channel funds to help the people face Covid-19 with “effort and wisdom”.

The prime minister said he had a capable Finance Minister in Tengku Datuk Seri Zafrul Tengku Abdul Aziz, who helped him channel the funds to the Prihatin Rakyat Economic Stimulus Package (Prihatin) assistance.

“When the Pakatan Harapan government was in power, the Prime Minister then said the government did not have funds. They said we (Malaysia) don’t have the money, said we are nearly bankrupt. How is it that when I am PM I have some money?,” Muhyiddin said, referring to his predecessor Tun Dr Mahathir Mohamad.

“To date, the Perikatan Nasional (PN) government has given out RM260 billion for Prihatin, and I added another RM10 billion yesterday to show PN’s commitment in helping the people during this difficult time.

“It is about effort, and wisdom. How smart you are at handling the money. The Finance Minister had done an excellent job to support all of you,” he said.

Pakatan Harapan had formed the government after the historic 2018 general election but collapsed in February this year with the resignation of Dr Mahathir as prime minister.

“Under this extraordinary situation, we had to make extraordinary decisions. Now, we have a 90 percent recovery rate for Covid-19 patients, and Malaysia is recognised as one of the best countries in handling the pandemic,” he said.

On the state polls on Saturday, Muhyiddin asked for the support of the locals for PN’s Tanjong Papat’s candidate, Ken Yong.

“In other seats, we must also be united and support all the BN (Barisan Nasional) candidates,” he said.

Muhyiddin said the Gabungan Rakyat Sabah coalition aimed for better facilities in Sabah such as its schools, hospitals, and sports facilities.

He also stressed on helping the hardcore poor group to get out of poverty.

“Vote for our candidates. They will become your spokespersons. If they do not do their job well, just let me know,” he added.

Muhyiddin also refuted allegations that he had scrapped the RM4.2 million project to repair 24 bridges in Sim-Sim village here.

“They said I instructed for the project to be cancelled, I did not. So now I am announcing this project to be resumed and allocation to be channeled accordingly,” he said.