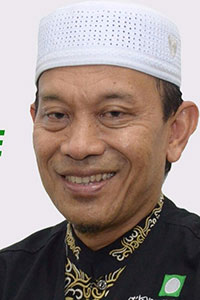 KUCHING: PAS Sarawak commissioner Jofri Jaraee said the party’s interest in cooperating with Gabungan Parti Sarawak (GPS) in the next state election is out of ‘concern for the fate of Bumiputeras’ in Sarawak.

According to Jofri, PAS has carried out its own research which pointed to GPS not being able to win the state election on its own, hence the decision by the party to offer a helping hand.

“We (PAS) want the importance of the Bumiputeras in the state to be a priority. The main authority of the state must be given to and maintained by Sarawakian Bumiputeras only,” he said in a statement.

He also stated that PAS, through its observations, saw similarities between itself and GPS in that both entities do not want Democratic Action Party (DAP) to take control and rule the state.

“Thus I think that both GPS and PAS should find a way to cooperate by planning out and formulating strategies for the next state election, in order to make sure DAP does not take over Sarawak,” he said.

Jofri also said he believed Sarawakian Bumiputeras would accept PAS fighting for their rights, as the party has existed in the state since 1986 when it opened its first Sarawak branch in Bintulu.

“This is evidence of PAS being accepted by the Sarawak community. Although the party is from Peninsular Malaysia, its agenda is not the ‘Semenanjung’ (peninsula) agenda, but rather the prosperity of the Malaysian people through Islamic principles,” he stressed.

He also believed the reason PAS is fast becoming the new ‘people’s choice’ in Peninsular Malaysia is because the Pakatan Harapan federal government, of which DAP is part of, is viewed as incapable of governing the country.

On that note, Jofri said even though PAS is offering to work with GPS, the party will not hesitate to rebuke GPS if the state’s ruling coalition fails to meet the needs of Sarawakians.

“If GPS does not take lessons in what happened to Barisan Nasional in the 14th General Election, then GPS should be ready for when the people of Sarawak choose PAS instead of GPS, because we do think that it could happen.”

He also said PAS is optimistic that the party will be part of the Malaysian government after the next general election in view of its recent pact with Umno.

“I hope GPS will join PAS and Umno in our quest to defeat Pakatan Harapan (in the next general election), as we see them as being unable to govern or administer the country.”

Lecturer’s husband charged with her murder in Sepang Court

Lecturer’s husband charged with her murder in Sepang Court