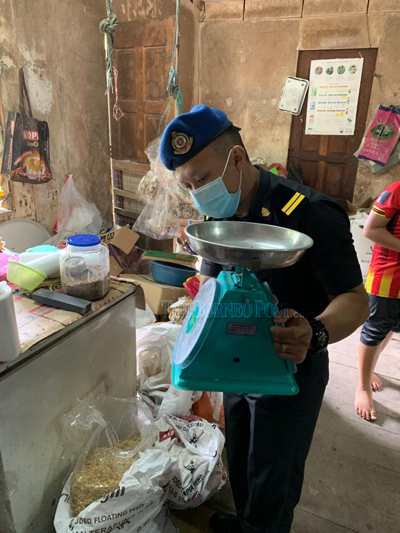 A KPDNHEP enforcement officer checks a scale at a premises.

He also said that no notices were issued for offences under the Price Control and Anti-Profiteering Act 2011 during that period, adding that they had checked 434 premises in Sarikei, Meradong, Julau and Pakan.

He added that no offences under Section 21 of the Price Control and Anti-Profiteering Act 2011 were recorded as all traders sold controlled festive items below the ceiling price.

“I would like to thank all local traders for their high level of compliance with the scheme in conjunction with this year’s Hari Raya Aidilfitri and Hari Gawai celebration. I hope they will keep up their commendable and positive attitude,” he added.

Mohamad said they had earlier recorded four cases after the Movement Control Order (MCO) was enforced, revealing that two of the offences were under the Price Control and Anti-Profiteering Act 2011 for failure to display price tags, and two under the Weights and Measures Act 1972.

During the subsequent Conditional Movement Control Order period, he said they had activated their Enforcement Command Centre for the public to lodge complaints.