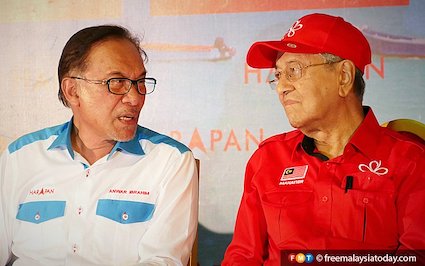 Just a couple of days ago Dr Mahathir Mohamad said he feared the Pakatan Harapan (PH) administration, which he heads, could end up being a one-term government no thanks largely to the endless feuding within the ranks of PH.

The Chief Minister of Penang Chow Kon Yeow of the DAP urged everyone to take this warning seriously and heed the prime minister’s advice.

Apparently, the novice Youth and Sports Minister Syed Saddiq Syed Abdul Rahman has turned a deaf ear to the advice of his party chief and prime minister with his demeaning and scathing attack on some party stalwarts of the DAP and PKR for merely asking for a specific date as to when Mahathir will hand over the premiership to Anwar Ibrahim.

Does Syed Saddiq not know that for every action there will be a reaction? If Syed Saddiq thinks for one moment, just one moment, that the DAP and PKR leaders he named as being disruptive to the administration are going to take this lying down, he is sadly mistaken.

Why should they? This is a burning question on everyone’s lips at the moment and a firm answer should be forthcoming. These senior leaders of the coalition are not young bamboo shoots that can be eaten just like that nor should you attempt to teach a duck how to swim when you are dealing with a stalwart who has been in politics long before you even got your SPM results!

To say that the prime minister “cannot administer the country if every day he is pressured and attacked by those considered to be allies of Anwar “ is uncalled for nor is it logical or acceptable.

Who is asking the prime minister to run the country on his own? Isn’t that the very reason people like Syed Saddiq are appointed to their lofty positions as a minister so that they can help the prime minister run this country? Am I wrong about this? You make decisions collectively as a Cabinet, do you not? So why make it sound as if the entire responsibility of administering this country falls squarely on the shoulders of Mahathir? Shouldn’t the Cabinet offload some of these niggling burdens from the shoulders of the prime minister? What are you there for otherwise? Administrating the country is not a one-man show. Not by a long shot.

Believe you me, it is not the pressure being exerted on the prime minister from the coalition partners or the pressure being heaped upon him by the opposition or various NGOs that is leading to dwindling support for the PH government presently. It is more than that.

It is a combination of various reasons – too many, in fact, to mention here. Enough has been said and shared about why the PH government is failing as a government. If you don’t know it by now you are both deaf and blind. And it has got nothing to do with what the senior party leaders of the DAP and PKR have said or are saying as claimed by you.

But in a nutshell, it is, in my humble opinion, about two simple words – trust deficit.

Why Mahathir may not step aside for Anwar

An open letter to Anwar Ibrahim