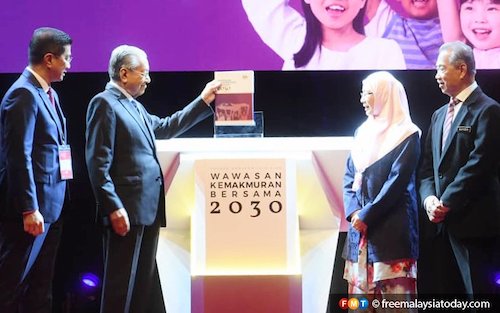 Dr Mahathir Mohamad has walked away from one of the big intellectual drivers of his decades at Malaysia’s helm: the idea that the former commodity-dependent backwater could be transformed into a fully developed country by 2020. It’s vital for the Southeast Asian nation’s future that the right lessons be learned from this letdown.

The prime minister conceded last weekend that Vision 2020, his demanding scheme to propel Malaysia to an industrial powerhouse, has failed. Launched in 1991, the plan became shorthand for the rapid development that characterised much of Asia during that decade. Mahathir effectively just closed the book on an economic era. For this, he is to be applauded, overdue though such an acknowledgment was.

While Vision 2020 was always more rhetoric than reality, it did serve to harness Malaysia to the climate of the times. Globalisation was in its glory days, elaborate supply chains were built throughout the region, and foreign investment poured in. Living standards and education attainment rose, Japan was Asia’s big commercial power and the end of the Cold War made Western-style economic and political opening seem like natural law.

I even believed it myself during my tenure in Kuala Lumpur before witnessing the devastation wrought by the Asian financial crisis. Not that Mahathir saw the West as necessarily the best template. He often favoured Japan and its model of post-war industrialisation, which inspired a signature approach that he dubbed “Look East”.

Every country needs aspirations. Mahathir’s goals were big and essentially laudable. In practice, however, development became equated with a stifling bigger-is-better doctrine. Malaysians boasted of the world’s tallest buildings, as the Petronas Twin Towers then were, highest airport tower, longest conveyor belt and biggest flag.

None of these monuments work particularly well today: hallway floors creak in the towers and very few of KLIA’s immigration counters ever appear to be open during the busy early evening. Developed countries succeed without devotion to superlative bragging rights.

Vision 2020 has been retired but there’s little sign that Mahathir has internalised the lessons. Speaking at the launch of a new economic plan, he blamed the two leaders who followed his retirement in 2003, especially Najib Razak, for the shortfall. Mahathir defeated Najib in elections in 2018 and returned to head the government at the age of 92. Najib has subsequently been charged with graft; he says he is innocent.

Mahathir’s new plan is called Shared Prosperity Vision 2030. Like its predecessor, this project is a sign of the times. Instead of reaching for grandeur, the focus is more down to earth: income inequality, inclusiveness, technology, an economy less reliant on oil. Implicit is an acceptance that the explosive economic expansion before the 1997-98 crisis is gone forever.

That doesn’t have to be a bad thing. Decades of rapid development widened the divide between Malaysia’s wealthiest and poorest fivefold from 1989 through 2016, according to the government. It was trendy to be a tycoon in the Malaysia of the 1990s. (To be fair, it was everywhere).

In Kuala Lumpur, this often meant – depending on race – that one could do very well out of state asset sales, ranging from airlines to the auto industry to roads. The signature economic policy of Malaysia for 50 years has been to raise the economic lot of the Malays. They are the largest ethnic group, but the ethnic Chinese minority has tended to control the wealth.

Successive governments have tried to chip away at affirmative action for the majority, a nod to criticism that it fostered cronyism and dependence on state handouts. They found it very tough politically. The Shared Prosperity Vision 2030 doesn’t seem to exert much energy on the issue.

By focusing on other social issues, though, Mahathir is again staying at the edge of a broader intellectual and political current. Leaders across the world are increasingly attuned to pocketbook issues and grievances that threaten support for mainstream politics. For Malaysia, and perhaps Asia generally, it also ends a period of economic history.

The region may still be home to developing economies; they are no longer rapidly developing.

Daniel Moss is a Bloomberg Opinion columnist covering Asian economies. He was previously executive editor of Bloomberg News for global economics, and has led teams in Asia, Europe and North America.

Anwar ahead of Mahathir in the race for PM8