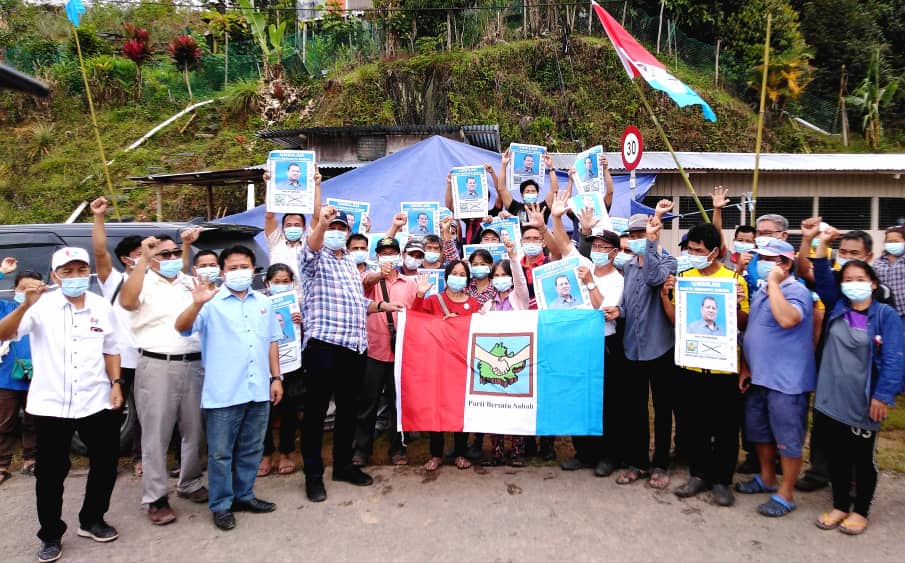 Joniston (fourth from left) and Soideh (fifth from right) with the voters in Kampung Poring, Kiulu.

KIULU: Tuaran member of parliament Datuk Wilfred Madius Tangau did not only ditch Barisan Nasional in 2018, he also turned his back to the ‘misompuru’ pact he preached with incumbent Kiulu assemblyman Datuk Joniston Bangkuai in the 14th General election.

Although hurt by the betrayal, Joniston still considers Madius a friend.

“In the last general election, we had campaigned together under the ‘Misompuru Bersatu’ (unity) tagline.
“In fact it was his suggestion that the three main KDM parties – UPKO, PBS and PBRS – form an official pact as a united front to face the election

“As a result, a Presidential Council comprising the three party presidents was set up and we won. But, sadly after the election, suddenly he left us to become an alliance of the Warisan-led government,” said Joniston at the meet-the-candidate session in Kampung Tudan-Poring, here, on Monday.

Professionally, Joniston said he had no qualm to work together with Madius, as the current member of parliament of Tuaran, in the spirit of developing Kiulu.
He said that having two elected representatives, despite coming from two different sides, it would augur well for Kiulu.

“If the previous state government was willing to cooperate with the federal government even though on the opposite side, why can’t we do the same for Kiulu.

On another note, Joniston stressed, “PBS is not in BN anymore. That is why we are using our own symbol in this state election.

“We call on the voters to hold steadfast to the meaning of integrity, principle and dignity. If they do that, I know they made the right choice.”

“Truthfully, I have lost confidence in Tangau. In the last election, he said one vote for Warisan equals to one vote for PTI (illegal immigrant).

“But now he is with them (Warisan) … it is like ‘buang ludah, tapi jilat balik tu ludah’ (did not walk the talk).”
Also at the programme was former Warisan Tuaran secretary, Rhodes Panilau.