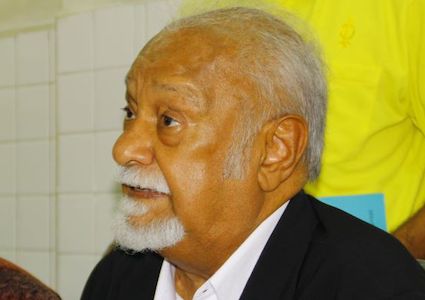 Anwar also needs to taubat without further betraying the people and their trust. In the public interest, and in particular in the interest of Pakatan, Anwar has a lot to answer for creating the woes of the coalition now. I am not getting the support from my own party leaders, including Kit Siang and Guan Eng on the crossover issue.

“Anwar also needs to taubat (repent) without further betraying the people and their trust.

“In the public interest, and in particular in the interest of Pakatan, Anwar has a lot to answer for creating the woes of the coalition now,” he added.

The chairman wanted his party to seriously consider his insistent call for the DAP to pull out from the coalition.

“I’m sorry I’m emotional but to put my point across, I need to be emotional,” he told newsmen at his office here yesterday.

In hard-hitting words, the fiery party veteran said Pakatan needed another leader – a good leader – before lashing out at PKR and DAP leaders who had supported Anwar’s plan to form the Federal Government by getting Barisan Nasional elected representatives to defect.

“I am not getting the support from my own party leaders, including Kit Siang and Guan Eng on the crossover issue.

“When I suggested that the DAP should seriously consider leaving the coalition, especially during the hudud issue, both of them also did not support me.

“It seems that they are supporting Anwar instead of me. I am the party chairman, don’t push me too far as I still have the support of the rank and file,” he said. Asked if he was thinking of calling for an emergency party meeting on the DAP’s role in the coalition, Karpal Singh answered yes.

He added that party-hopping could never be justified as it could be compared to “one murdering the very parents who were responsible for one’s birth merely upon one reaching adulthood.”

He was confounded as to how Anwar could have openly espoused crossovers after the people gave a resounding mandate to Pakatan in the last general election.

Karpal Singh said Deputy Prime Minister Datuk Seri Najib Tun Razak had mentioned that it was Anwar who had started it all (party-hopping), but added that two wrongs could never make a right.

“For the record, Barisan had accepted crossovers from DAP as far back as 1969, and therefore it is hypocritical for the Deputy Prime Minister to place the blame on Anwar, who joined Barisan in 1981 and rose through the ranks to become the prime minister-in-waiting just before his expulsion from the Barisan in 1998.

“It looks like he (Anwar) did not learn of the morality or rather immorality of political kangaroos hopping from the opposition to the Barisan during the time he was in the government,” he said.

On the police reports lodged against him by Penang Umno Youth leaders for questioning the rights of the Malay Rulers, Karpal Singh warned of the consequences of lodging false reports.

“They better not play with me. Enough is enough, if they want trouble then they have come to the right place. I have been in politics since 1974. Who is this Umno Youth?” he said.

Karpal Singh said there was nothing illegal or unlawful in what he had stated in relation to the Sultan of Perak being subjected to the due process of law, or his claim that the Sultan could be taken to court for dismissing the Pakatan state government.