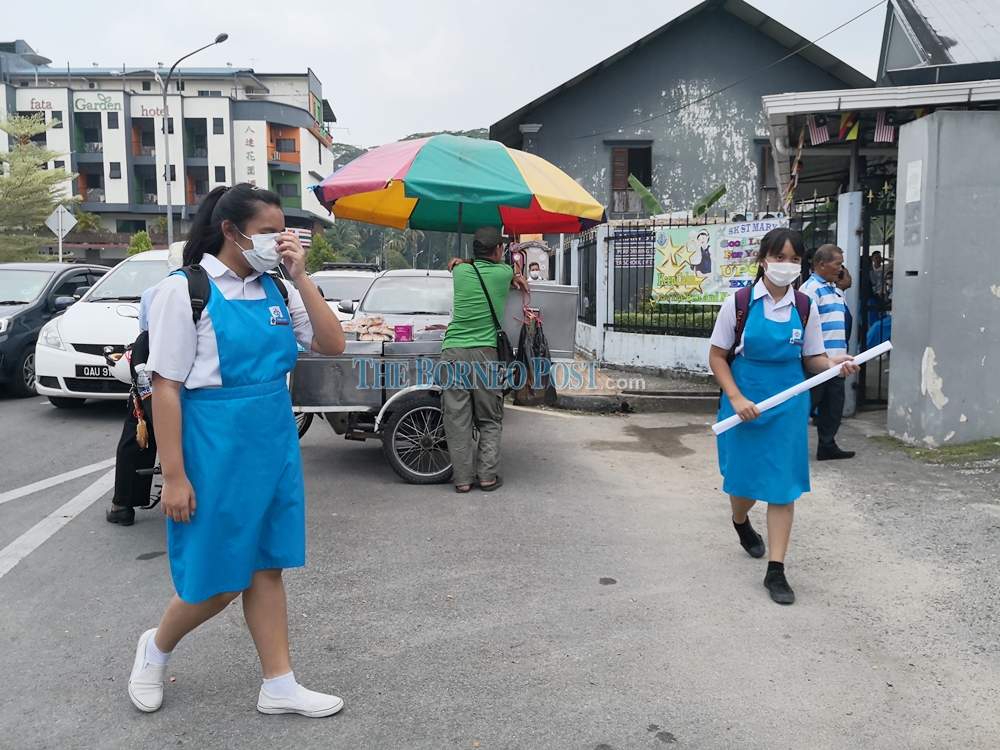 Students of SMK St Mary don face masks as they leave school due to the haze. Photo by Muhammad Rais Sanusi

KUCHING: The haze situation in Kuching has improved slightly today, although the Air Pollutant Index (API) reading of 113 still shows an unhealthy air quality level as of 7pm.

Schools are scheduled to be open due to the drop in the readings.

Downpours at around 12.30am late last night alleviated the haze, improving the API readings and giving some relief to the city.

According to the Department of Environment’s website, as of 7pm this evening, API for other divisions like Samarahan read as 98, Sri Aman (Unhealthy Level at 144), central regions (between 70 to 72), Bintulu (82) and Miri (71).

“The API reading at 4pm today is less than 200, thus schools throughout the state will be open as usual from today onwards,” said Azhar through his press statement here.

Meanwhile, the Fire and Rescue Department (Bomba) ended their operations on bush fires covering about 30 acres of land at Jalan Camar, Taman Sri Perkasa here, which has been ongoing for the last seven days.

Bomba Tabuan Jaya state operations assistant director Tiong Ling Hii thanked the state government, the public and state assemblymen who have rendered their assistance to firemen during their work.

As of 5pm, Bomba recorded a total of 202 forest and peat land fires throughout the state since Sept 1.