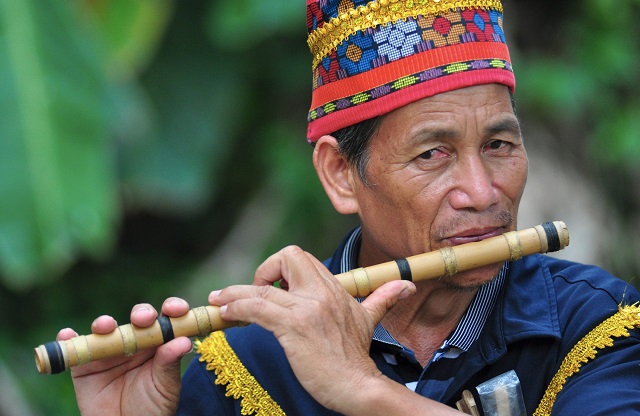 TAMPARULI: A farmer has made an extra mile to preserve two traditional musical instruments of the Dusun ethnic group to ensure it would could be passed on to the ethnic’s youngsters.

“I did this not for profit, but rather for the love of Dusun ethnic musical heritage such as bungkau and suling which are slowly disappearing and becoming unknown to the younger generation.

“I hope the youngsters could recognise and enjoy their own cultural heritage, thus preventing the art from being lost with time,” he told Bernama here.

Gondipar, a well-known bungkau and suling player in the district, is also a member of the Tuaran Culture and Arts Association (Pesta) who conducted a daily traditional Dusun music and dance performances on the Tamparuli suspension bridge.

“The move will help to increase the supply of local handicrafts marketed through Kraftangan Malaysia, as well as increasing family earning and attracting foreign tourists to the country,” he said.

He said he was inspired by his father Sorioh Galais’ expertise in making the traditional bamboo instruments.

“When my father passed away at the age of 60, I still could not learn the entire art of making the traditional musical instruments from him.

“However, I tried to learn on my own until I was able to create and teach this knowledge to the youngsters,” he said.

Hence, he hoped that the state Ministry of Tourism, Culture and Environment could support his effort by promoting and helping him to market the musical instruments.

Dr Mahathir: ‘No idea if transition issue will be discussed at PH meeting’

Dr Mahathir: ‘No idea if transition issue will be discussed at...