Home Opinion Anwar will be forming a backdoor government 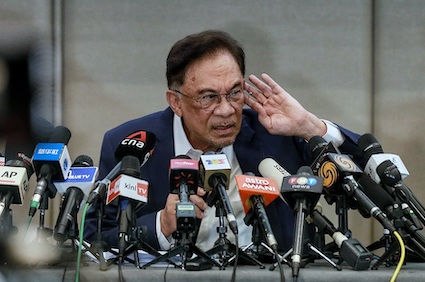 Answering questions during the press conference, Anwar kept insisting that his “new” coalition, was “not a backdoor government like Muhyiddin’s”. How is this so?

When will politicians understand that politics in Malaysia is no longer just about how many MPs will form a government? Malaysian democracy has to be something more substantial and fundamental than pure numbers.

Democracy is not about switching sides, of personal political survival or leap frogging from party to party, nor is it about fiscal rewards or positions of importance.

On Sept 23, Anwar Ibrahim convened a press conference and announced that he had managed to convince many MPs to form a new government, adding that Muhyiddin Yassin’s administration had fallen.

Talk is easy. Moreover, politicians make all sorts of promises, many of which we know they are unable to keep. Is Anwar any different?

When asked about the “majority” MPs, and which party they were from, Anwar said he would have to keep everyone waiting because he wanted the Yang di-Pertuan Agong to be the first to know. He said that despite being granted a royal audience, there was a delay because the King had been hospitalised. Anwar claimed to have the backing of a “strong, formidable majority” of MPs.

So, we are still in the dark and left wondering if Anwar’s majority really exists. Anwar may want to keep things close to his chest, but his announcement has given an opportunity for Muhyiddin to shore up his political defences and apply more carrot and stick strategies to maintain the loyalty of his MPs.

The failure to give DAP’s Lim Guan Eng ample warning is also cause for concern. His remarks about not knowing the details of Anwar’s Meridien Move, will be seized upon by Pakatan Harapan’s detractors. They will ask: If a close ally of Anwar’s PKR is kept in the dark, then what else is couched in secrecy?

Answering questions during the press conference, Anwar kept insisting that his “new” coalition, was “not a backdoor government like Muhyiddin’s”. How is this so?

No-one who voted for Pakatan Harapan in 2018 would want Umno-Baru MPs to lead them, especially if many of the Umno-Baru MPs are tainted with allegations of corruption and a few are on trial for alleged CBT, money-laundering and corruption.

When pressed further about his new government, Anwar said most would be Bumiputera and Malay-Muslims, but he insisted that all the races would be fairly represented.

If Anwar really wants to make a difference, he should come out of his comfort zone, and stop pandering to the insecurities of the ultra-sensitive Malays. He should empower the Malays by making them more competitive and open-minded. He should urge them to embrace the modern and fast-changing world, where race and religion take a back seat.

Fifty years of the New Economic Policy have failed to uplift the lives of millions of Malays, but these affirmative action policies may have produced the result desired by Umno-Baru, which is to keep the Malays ignorant and dependent on handouts.

For decades, PAS and Umno-Baru have spread propaganda that the Chinese, or the DAP, or both, scuppered the Malay’s ability to forge ahead. They have also alleged that the Chinese want to make Malaysia a Christian nation and get rid of Islam and the Muslims. None of this is true.

Despite handouts and many government schemes, many Malays are still dirt poor. The Malays need discipline to boost standards. They should be told that nothing is free in life. Work is preferable to welfare. More Chinese bashing or the oft-repeated mantra that “Malays need protection and Islam needs defending”, will not boost Malay confidence or productivity.

One must ask why Anwar made his announcement a few days before the Sabah election.

His focus should be on helping Shafie Apdal secure a win, so that Shafie can finally fulfil Sabah’s long forgotten requests for increased power and money from Putrajaya.

Perhaps Anwar sees Shafie as a threat. The Sabahan has promoted unity during his campaign, and said that he does not want to build one particular race or religion. Meanwhile, Anwar’s emphasis lies with Malay and Muslim dominance.

Anwar may claim to have the numbers, but until everything is out in the open, there is nothing to get excited about. Moreover, what will happen next, in West Malaysia, may be influenced by the Sabah election result. More importantly, if Shafie wins, Sarawak will be thinking hard about its future.