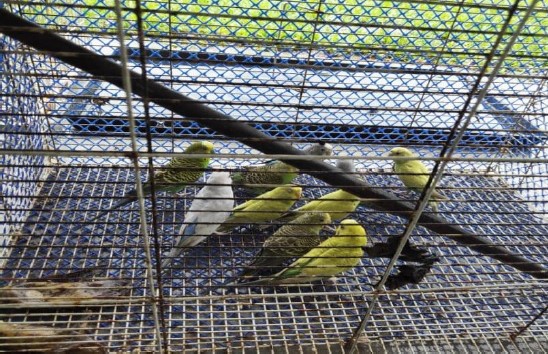 Eight parakeets and two Atlantic Canaries were some of the protected birds seized.

KUCHING: The 11th Battalion of the General Operations Force (PGA) has detained a 56-year-old man for illegal possession of 11 protected birds estimated to be worth RM 15,000 during an integrated operation conducted at Kampung Sebat, Sematan on Wednesday.

“During the operation, we seized one Crestless Fireback, two Atlantic Canaries, eight parakeets and 10 love birds – all of which are categorised as totally protected wildlife. A 56-year-old male who claimed to be the owner of the wildlife was also detained.

“Based on information received, it is believed that the wildlife were obtained from a neighbouring country,” Rosdi said in a statement last night.

The case was then handed over to SFC for further investigation under Section 29 (1) of Wildlife Protection Ordinance 1998, which carries a maximum fine of RM50,000 and not more than 5 years of jail if convicted.

Security under control, go out and vote, says ESSCom commander